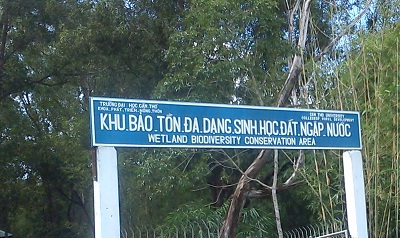 Hoa An center’s development has six main stages as following

Base on decision No.150/QD.UB.76 of People’s Committee of Cantho province date May 15th, 1976, the area of 370 hectares first were managed and used by Ho Chi Minh Communist Youth Union of Cantho Province Group. Afterwards, a row of five classrooms was built, canals were dug in order to wash alum, pineapple and sugar-cane were plant on the area of 7 hectares, and soil was prepared to grow rice. Yet, there were only pineapple and sugar-cane which could survive on this acid sulphate soil (ASS) for several years. In addition, their yield was not high due to lack of understanding about this kind of soil.

The center, during this period, was called “VH-10 Research and Acid Sulphate Soil Use Station”. On October 10th, 1980, Cantho province signed the decision No.488.UBT.80 so as to allot 60 hectares of 370 hectares managed by the Communist Youth Union (CYU) to Cantho University (CTU) which needed the area to do research for a co-operation program between Vietnam and Holland (VH-10). At this time, a group of staff appointed by CTU monitored progress of building the Research Station while the staff of CYU returned to Cantho province because they had no plan to carry out. Therefore, the area managed by this group had no use. The Research Station’s main budget to operate was from the VH-10 program and CTU. To basic building, there was a polder with dyke and irrigation system in bad conditions. There were also results of ASS scientific research.

Up to 1984, Cantho province promulgated the decision No.65.UBT.84 to temporarily allot the area of 310 hectares managed by CYU to CTU. This area was not used for over 4 years (from 1980 to 1984), so 65 hectares of its total area was reclaimed by some landless farmers during the period. They mainly used the land to grow winter rice crop, but the crop’s yield was low and unstable. In this stage, CTU invested to improve farming system as well as dig more cannels and develop irrigation infrastructures using to water and wash alum. Consequently, some areas of the land could nourish two rice crops per year. Moreover, the yield increased but was still low at 3.5 ton per hectare in average. The farmers’ households reclaiming land before were given jobs and some ones ask the Station for work. Local people called the Station as “VH-10 State Farm” due to those special activities. Its main budget came from CTU.

Hoa An center was established to meet the teaching and researching demands of CTU up to 2020. Hoa An Center undertakes research, practice and accommodation of CTU staff and students.

Stage 6 (2011 until now): A directly-under unit of College of Rural   Development

Hoa An Research - Application - Biodiversity center was a unit directly under the management of College of Rural Development on July 1st, 2011.